He's petrifying my Pa - before our very eyes. He's becoming a fosssil, a fossil that leaks! It's so sad because as he has petrified we have not been able to say goodbye. We lost the man he was during his fossilisation and did not realise until it was too late. This is dementia. 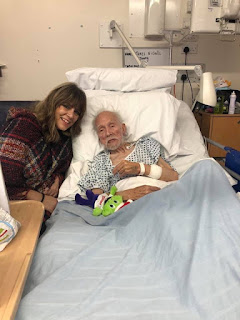 petrifaction or petrification is the process by which organic material becomes a fossil through the replacement of the original material and the filling of the original pore spaces with minerals. Petrified wood typifies this process, but all organisms, from bacteria to vertebrates, can become petrified (although harder, more durable matter such as bone, beaks, and shells survive the process better than softer remains such as muscle tissue, feathers, or skin). Petrification takes place through a combination of two similar processes: permineralization and replacement. These processes create replicas of the original specimen that are similar down to the microscopic level.

My Pa's body has or still is being taken over by the fossilised version of himself. It is difficult to recognise the man he once was. And yet he is all too familiar to anyone who knows someone with dementia because they all begin to look the same.